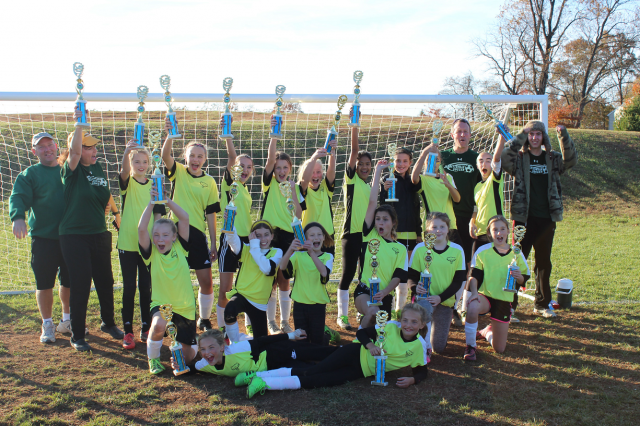 For the first time in the program's history the girls teams from U9 to U13 swept the Harford County Northern Region Soccer League (NRSL) tournament divisions this year.  The U9 teams of John Stearns and the high school trio of Charlotte Doyle, Anna Dolce and Annabelle Somarriba took 1st and 2nd place trophies home after a contentious head to head game where John's team pulled out a win in the closing minutes of the game.

Starting the season a bit shorthanded on players, the roster eventually filled and the U10 girls team of Mike Lewis came through in the finals with the win.  Bill Saltzer, his band of coaches and cast of nearly 2 full teams of girls trained all season 2x per week and found their way to the 1st place trophy as well.

Moving to the full field of 11v11 at U13, Eric Clayton and family along with assistant Jeff Urban led the girls through a dominant undefeated season and wrapped up the season with the big trophy.

The 2018 season was very successful despite the rain.  Thanks to all our parent coaches and volunteers this year and a very special thanks to our young coaches who selflessly volunteered this year.

We hope to see most of you again next fall and look forward to welcoming new faces.